The first group of Japanese tourists arrived in Equatorial Guinea for a tour in the Continental region through the Travel Agency “Vuela Seguro” Malabo.
After visiting the neighbouring state of Gabon by car, on January 18, the Group  reached the future state capital  Djibloho and stayed at the wonderful GRAND HOTEL DJIBLOHO. The tour then continued towards the mainland and to the coast crossing the various inner cities as Anisok, Niefang and reached to  Kogo. After the tour the Group returned by flight to  Malabo and then to  Bata where they boarded an intercontinental flight via Frankfurt back to Japan.
Published by LHM, Member of ATTA 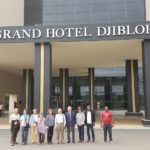